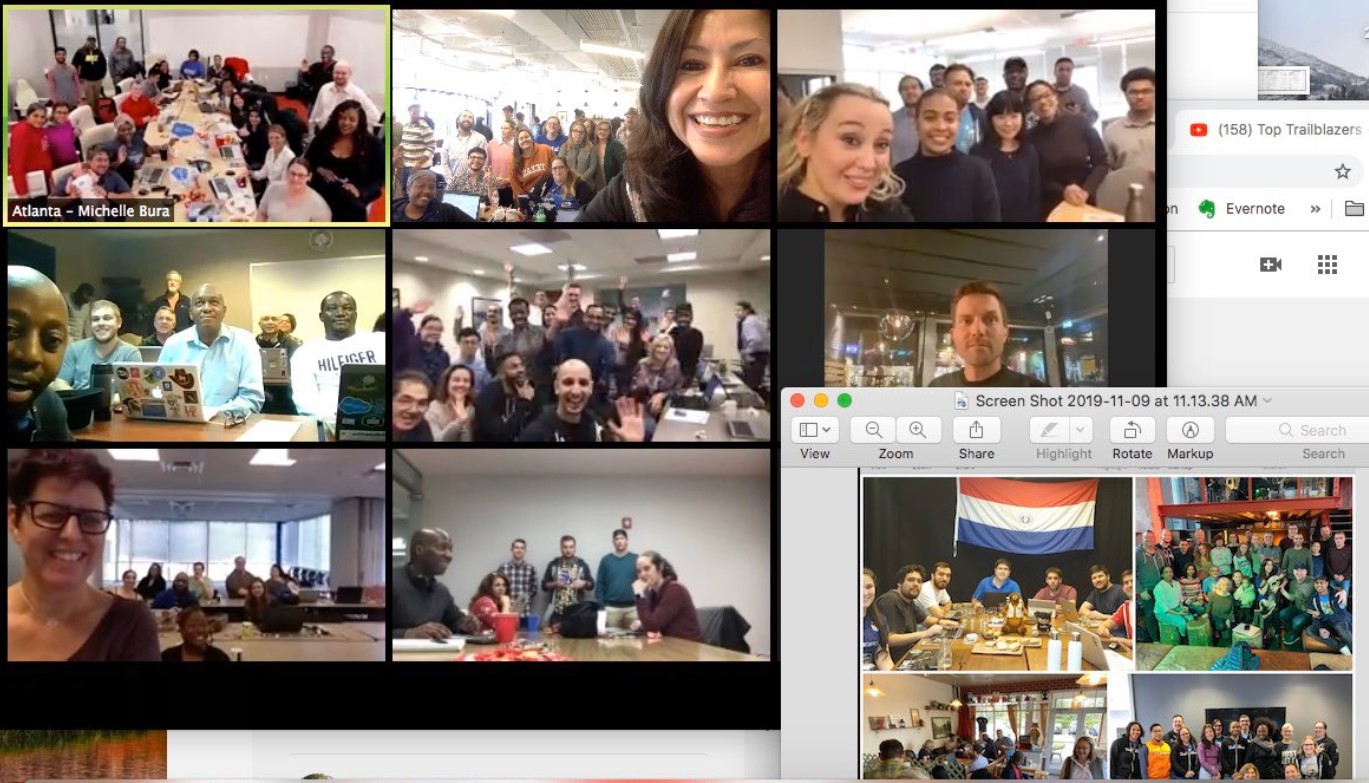 If you’re coming here to learn why to do a SalesforceSaturday, then we recommend Antonela Lula’s Boston World Tour presentation (slideshare here). It’s also prettier and more visual 🙂

This guide focuses on how to do a SalesforceSaturday.

In a nutshell SalesforceSaturdays are a place where people come together to learn more about Salesforce. In the process we have fun and, inevitably, we grow* as individuals and as a community. Anyone willing to give up their Saturday morning is very dedicated to the cause, or at least more willing to have a nose around, than your average Gwen.

*And that’s not just from the cakes.

An important word about usage

SalesforceSaturdays differ around the world. In APAC they are even called something completely different (“TrailheadTuesdays”). This edition, crowd sourced, tells you what works for the Dutch community.

It is a recipe – every SalesforceSaturday has its own recipe, a combination of logistics, aims, kindred souls and other events that are occurring nearby (both geographically and in terms of time) – so go with the flow and see what happens! Be happy to change on the fly, see what works, and doesn’t work, and, above all, don’t overthink it. That’s the point of SalesforceSaturdays, that they’re easy to set up, and get on with.

How are SalesforceSaturday different from Community Groups

Please feel very free to skip this section – it’s just for those who are curious, particularly Community Group Leaders.

We like to think that SalesforceSaturdays are more informal smaller/cosey, interactive affairs (ok, when everyone’s not got their heads buried in a laptop), whereas Trailblazer Community Groups are a more passive, typically larger and more formal experience.

There’s space for both types of networking, learning and sharing in the Ohana. Many of us who start going to SalesforceSaturdays also end up going to Community Groups (or vice versa!). It’s a virtuous circle 🙂

Community Groups are meetings typically organised about 2-3 presentations with networking time before, during or after. Salesforce also give some seed money and content suggestions to help make them happen. Usually they’re not on a Saturday. Behind the scenes there’s also some formal rules and codes of conduct that Trailblazer Community Groups Leaders must subscribe to.

The key takeaways are that the support network for SalesforceSaturday is informal, and there is no funding, which has pros and cons. The aim is largely the same, the style very different.

n.b. There’s nothing to stop you being a Community Group Leader and run a SalesforceSaturday – many people do; but even better if you grow the community and encourage someone else to set up the SalesforceSaturday (you can still help out!).

You can’t do anything without a location. As you don’t get any funding, and shouldn’t charge (to make sure that the event is accessible to everyone regardless of circumstance), you need to find a free venue. Some options include:

For all of these we recommend asking permission from the owners first, to help create that welcoming atmosphere and avoid any misunderstandings. Also, thanking your hosts on social channels can help solidify a spot for future meetings 🙂

Also, check for power points and good wifi! A pro tip is to bring some power bank extensions.

It turns out that this one’s easy. You’re focusing on learning. You need to be meeting at least monthly to achieve this in a meaningful fashion and to get into the right habit. Some groups meet even more frequently – e.g. weekly or fortnightly.

By the end of each meeting, the date for the next meeting should be announced. Even better if they are scheduled a few months in advance and announced – it makes it easier for those with other commitments to plan.

The best plan is to say “We meet every X Saturdays” or “We meet on the Xth Saturday of the month.” Over time this might shift too. You might start out monthly and move to fortnightly, for instance, later on.

How long should a meeting be? This one is up to you of course. Here our meetings tend to be advertised as starting at 09:30. People wonder in at their own time, but most are there by 10:30, with the groups generally disbanding around 12:30.

The key is that people wander in and out, depending on their mood, availability and how much of a morning person they are. It makes group activities/content a little harder but not impossible.

And a reminder, that you need to tailor it for your community. The reason that ANZ region meets on Tuesdays evenings is that people typically head outdoors, to appreciate nature, over the weekend. This author is a little bit jealous!

The easiest way to start is just by people doing Trailhead. You can work solo, in pairs or in groups.

When you feel you have reached “quorum” (most people being there) you might want to go around and do introductions – talk about what people want to work/focus on. This can be more than enough for a session.

In Amsterdam, we have “Salesforce Muckups” which we start towards the end of the session, to allow people to talk about the successes and failures they’ve had over the last week, to give time for reflection and feedback. It’s a good way to change the energy levels and an excuse for everyone to learn a little about each other.

As time goes on, you might want to progress to doing some presentations, but keep the spirit of the group. These are more formal. Anything from 5 to 30 minutes, allowing people to practice their skills, but not to interrupt too much from the rest of the morning. Or you could go “ad hoc” and people ask if anyone knows something about a particular topic (but keep it time-limited!).

But also reach out to local groups and check what lessons you can learn from them.

Technically you don’t need one of these, but it helps manage expectations, means you can communicate with everyone and have an idea about how much space you need.

Eventbrite is free. Here we like Meetup because, even though there is a small charge (which you will have to cover), lots of people use it to discover local activities. This means people turn up who won’t have even considered Salesforce without happening to spot it. Whatever works for your local area!

No use having something wonderful to share if no one knows about it, so…

Basically “work it”, and do post to social media afterwards with photos, tagging in members; people engage with these and often reshare it (which is what you want!).

What’s the worst that can happen? You have a cup of tea in the morning and do some Trailheads whilst waiting for people who may join you?

Running a SalesforceSaturday is great, but if you’re unavailable due to a cold or other equally traumatic life event (e.g. kids birthday party), then you don’t want everyone else’s fun to stop. Eventually look for a co-leader or two to run the group with you. That way you can run it in turns, perhaps increasing the frequency, and/or bounce ideas off each other. It also helps in that you can share responsibilities (publicity, venue hunting, etc). Basically, you’re putting on the SalesforceSaturday, but the biggest sense of achievement comes when it is self-sustaining and can run without you(!)

First of all thank you for reading. We hope it’s given you food for thought.

Thanks in particular go to Stephanie Herrera MVP, founder and leader of SalesforceSaturday. Also for her support during the writing of this guide.

We use cookies to ensure that we give you the best experience on our website. If you continue to use this site we will assume that you are happy with it.OkPrivacy policy